With cooking as with gaming, knowing your tools and your moves is vital. Thus, the pan. 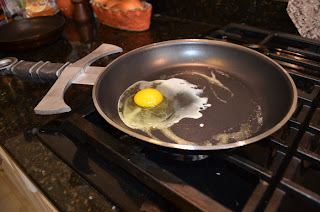 What is a pan? It's basically the more evolved version of the hot rockTM. What it does is simple - heat is transferred to the base and then, if the pan is nice and thick and well made, evenly distributed to the underside of whatever is inside the pan. A crappy pan will sear your food in a ring, where the heat is highest and leave the rest untouched. In many way a pan is like a sword - a cheap one will make you think you can do things with it, but you will be deluding yourself.

So, assuming you have a decent pan, you are now in possession of one of the most versatile cooking tools known to man since he was a caveman. Or a cavewoman. Combined with a lid, there's few things you can't do with a pan (and most of those things involve either a pot or an oven).

The next thing to get to know is your heat source. Gas is great, because it can be easily and quickly adjusted. Hot plates are ... finnicky. They'll take more work to use well and require more attention, but they can work. Induction rings, well, you need a special pan for those as well, don't you?

The thing is, each pan is slightly different so you have to practice with your pan and your heat source to truly master this versatile tool. There are just a few things to keep in mind when caring for your pan:

1. don't overheat it when it's empty as this may warp it. Which is bad.
2. when it's hot, don't cool it suddenly with cold water as this may warp it. Which is bad.
3. use wooden utensils (or plastic, if you're pathetic) so you don't damage the surface.
4. if your pan is non-stick or teflon for the love of Carcinogens don't scratch the surface with metal implements, knives or abrasive cleaning tools.
5. also, don't cut stuff in a pan - even if you're not hurting the pan, you're hurting the knife and being silly.

When I started cooking, around the time I went to university and suddenly had to feed myself, I knew how to do one thing well: an egg. Now, granted, there's not much that can go wrong with an egg, but trust me - I've seen things go wrong.

As far as I am concerned, there are two main ways to use a pan:

1. at low heat to slowly simmer the contents, be they vegetables, fruits or the flesh of formerly ambulatory creatures. This also works fine for eggs, to be honest. This is easy, all it takes is patience - the lower you keep the heat, the less attention you have to pay and the longer it takes. At the lowest heat settings a lot of cooking becomes a fire-and-forget affair - toss food in, ignore it for 15 minutes, stir, ignore, stir, ignore, serve. As far as meat: anything that is rounded, like chicken legs, pork in general (because you really want pork thoroughly cooked), bratwurst and so forth.
2. at high heat to quickly sear the juicy flesh of formerly ambulatory creatures. This is where the pan shines, and I don't mean because of the glistening droplets of fat that will fly all over the place. A good pan is all you need to prepare most steaks, fish fillets and duck breasts. It takes some practice and when you're starting out, just remember: if you don't cook something for long enough, you can always put it back in for some more bracing thermal treatment. Charcoal, on the other hand, does not become juicy again. As a rule of thumb, slices of meat that are about a thumb's width thick (from 1,5 to 3 cm, let's say) will need around 2 minutes on one side, flip, two minutes on the other side.

However, the pan is perhaps not a tool that works very well with gaming. Unless you have a massive pan and the equivalent of a barbecue gaming session, you simply won't be able to produce enough finger food fast enough in moth situations. An exception would probably be ribs and chicken wings, but those are barbecue bits, after all. If you don't mind equipping your players with forks and small plates, though, then the pan should definitely be on your menu.

For gaming the pan has two big pluses, in my book:

1. the lovely smells that set everyone salivating.
2. greasy finger food will quickly make for veteran character sheets, which give +10% xp per session. If the character sheet actually becomes transparent in places, the character may be eligible for a
Posted by Luka at 9:18 PM

Email ThisBlogThis!Share to TwitterShare to FacebookShare to Pinterest
Labels: cooking and gaming